Here is a continuation of my former post about the lady who invited her Muslim workmate over for dinner. (Details of these events have been altered.)

“About a month after their dinner together, Julie and John invited Ahmed and Nabila to attend a new exhibit coming to The Museum of Biblical Art, not far from their homes. 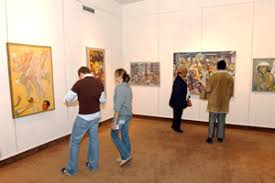 “Their invitation was accepted, and together they strolled through the museum, stopping to study each painting, sculpture and other art pieces.  The theme of this particular exhibit covered the entire Bible beginning with creation, depicted events of the Old Testament, and went on through the New Testament ending with Revelation.  As Muslims, Ahmed and Nabila were knowledgeable about the Old Testament, and were especially taken by a particularly intricate art piece, spending long moments studying it; even taking pictures.

“It wasn’t long before Ahmed began asking questions about John and Julie’s belief.  He said that one of his coworkers is Catholic, “How does your belief compare to that?”  Julie explained that while the Catholics believe the Pope is next to God, followers of Jesus have the assurance they can go directly to God in prayer.  “There is no one next to God except for His Son Jesus Christ.  I am a sinner, but because God sent His Son Jesus Christ to become the sacrifice for my sins, I am totally cleansed from my sins and can pray freely and directly to God.”

“Nabila listened carefully; then suddenly rushed to Julie throwing her arms around her and hugged her tightly saying, “Oh Julie, I can tell that this is deeply meaningful to you.”  Nabila continued to hold onto Julie for a while as Julie said, “It is deeply meaningful, and I am so grateful that Jesus cleansed me from my sins.”

“It so happened that the artists for several of the art pieces were in attendance at the exhibit, and available to talk with visitors about their work.  While Nabila, Julie and John moved on to other exhibits, the artist arrived who had created the intricate art piece that had so captured Ahmed and Nabila.  Ahmed had many more questions for him, and the artist graciously spent one-on-one time with him explaining more about his piece and the true events in the Bible.

“The time finally came to leave the museum and both Ahmed and Nabila exclaimed what a wonderful afternoon they had experienced.

“That night Julie mentioned to John, ‘When God has a plan, never underestimate how He can use even a piece of art.’

One thought on “When art crossed cultures”